In wine-growing areas, the weather conditions are almost continuously favourable to infections by powdery mildew. Unlike black rot and downy mildew, secondary powdery mildew infections do not require free water on the plant surface.

The development of powdery mildew depends mainly on air temperature and relative humidity. Rain (or overhead irrigation) and wetting remove spores in the air and destroy conidiophores, stopping sporulation for a period of time until new conidiophores form.

The powdery mildew fungus overwinters as mycelium inside dormant buds or as cleistothecia in leaves on the ground. In most production areas, cleistothecia are the most important source of inoculum. They eject ascospores during periods of rain between the onset of vegetation and flowering.

In situations where no primary infection occurs before flowering, powdery mildew outbreaks during the summer can be remarkably low. The model, therefore, begins with the ejection of a first ascospore. When the symptoms of this first contamination appear, then the production of secondary spores begins. 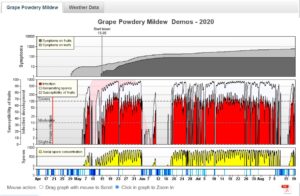 In the bar below the graph, dark blue represents the periods when your weather station recorded rain. Light blue is the period when there is wetness on the leaves. This is calculated based on your records of rain, relative humidity and leaf wetness.

The lower graph indicates the sporulation of conidiophores. This is based on T ° C and is not affected by RH. The rains destroy the conidiophores and thus reduce the risk of sporulation.

The central graphic indicates spore germination periods and infection periods (in red). Infection values ​​are based on humidity and temperature data. However, the berries are only sensitive from the “separate flower” stage to the closure of the bunch with a maximum risk at fruit set, the period of sensitivity of the grapes is shown in pink on the graph. This only serves to better target the fungicide treatments and does not change the value of infections. Other organs of the vine can still be attacked after the period of fruit sensitivity. The red vertical bar corresponds to the first ascospore, which will start the simulation of the development of the disease.

To allow a correct simulation of the fruit sensitivity period, be sure to set the correct date of the first unfolded leaf (BBCH 11) onset of flowering (BBCH61) for the local parameters of each location.

The upper graph simulates the appearance of symptoms on leaves (in light grey) and on grapes (in dark grey) on a logarithmic scale.

As powdery mildew infections develop continuously, this model has less added value for disease management than other RIMpro models.

Traditionally, sulphur is sprayed frequently during weeks with favourable weather conditions for powdery mildew infections. This model is unlikely to help streamline this practice.