Apple powdery mildew infects young leaves, which reduces tree vigour but also affects fruit yield and quality. Even though apple trees are relatively tolerant to powdery mildew, once the inoculum has set in, the situation can quickly become difficult to control.

The development of powdery mildew depends mainly on air temperature and relative humidity. Thus, infection forecasts are more reliable than they are for diseases where the risk of infection depends on rainfall.

Applications of fungicides with antisporulant or protective activity should be targeted on days at high risk of infection. 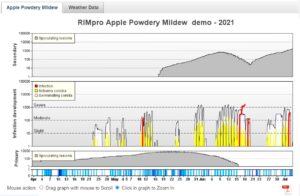 In the bar below the graph, dark blue represents the periods when your weather station recorded rain. Light blue is the period when there is wetness on the leaves; this is calculated based on your records of rain, relative humidity, and leaf wetness.

The bottom graph simulates the sporulation of “primary” lesions. In the spring, buds infected with powdery mildew open 2 to 5 days later than healthy buds. The growing mycelium covers the leaf tissue that develops from these buds. These “primary infections” are the source of conidia for secondary infections.

The middle graph simulates the release of spores into the air (in yellow), their germination (in white) and infections (in red). The concentration of aerial spores mainly follows a diurnal pattern with low levels at night. The concentration of spores in the air correlates positively with temperature and VPD and negatively with RH, rain, and leaf wetness. The model simulates a growing apple tree. Developing leaves can only be infected when they are young and thus contribute to the aerial spore population.

Rain (or overhead irrigation) removes spores in the air and destroys conidiophores, stopping sporulation for a period of time until new conidiophores form.

The upper graph simulates the sporulation of “secondary” lesions. Powdery mildew lesions develop and sporulate for about two weeks until the infected leaf develops ontogenetic resistance. In the current version of the model, shoot growth ends in August, which interrupts further disease progression.