Various models for winter chilling have been developed. As these models interpret the effect of temperature differences, the models react differently to the winter conditions in different climate zones. Results from one model cannot be “translated” directly into a value for another model.

RIMpro runs and presents the results of the four main winter chill models in parallel, based on hourly weather data. The Dynamic Model is regarded as the most accurate model and proposed as a world standard by experts.

To use the model correctly, your weather data source should provide the weather data over this complete time range.

Temperature is measured in hours since the start of the dormancy season. The Chill Hours accumulate with Temperatures between 0 and 7.2 C from the start of dormancy.

This model was initially developed for the warm winters in Israel 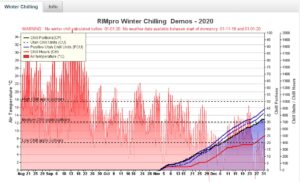