Rosy Apple Aphid (RAA) is an economically important pest on apples. Control measures are necessary every year and in almost every apple orchard, both organic and integrated.

Apples on branches colonised by these aphids stay small and misshapen, are not eatable, and do not drop. Shoots populated by RAA colonies grow stunted and have no flower buds the following year. Infestation levels differ between years and orchards and are determined by the year, presence of summer hosts in or nearby the orchard, natural enemies, and the side effect of insecticide treatments against other insects.

There are two periods for effective control of the Rosy Apple Aphid: 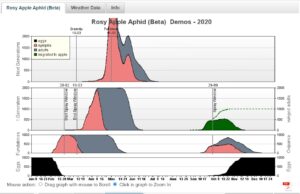 RAA overwinters as diapausing eggs on the bark in the lower half of the apple tree. The eggs hatch shortly after bud break over a two-week period. The egg hatch is complete at half-inch green, also commonly referred to as the early mouse-ear stage.

The development rate is calculated according to the temperature, with a lower threshold of 4.5°C.

The second graph (spring) simulates the population of the fundatrices.

After leaving their egg, young aphids move towards the opening fruit buds. As the fruit buds develop, the aphids hide inside the clusters sucking the sap from the leaf stems. The young aphids pass four nymphal stages before they become adult fundatrices (=stem mothers).

Typical RAA-gals become visible in the late tight cluster bud stage. This is the moment the first RAA presence is noticed in orchards, and the fundatrices are then already in their second or third stage. The first adults are found during the pink bud stage.

The third graph (spring) simulates the 1st generation of aphids.

The production begins 1 – 3 days after the last moult of the nymphaea fundatrices and can continue for over a month. Published data on average total fecundity range widely from 80-260 per female. The colonies of this second generation develop on the lower side of the rosette leaves of flower clusters.

The fourth (upper) graph simulates the following generations on the shoot leaves of the apple trees.

3 to 6 RAA viviparea generations develop on the apples. Because the live reproductive stage of the aphids is longer than the nymphal stage, the generations overlap. The successive generations move to the tip leaves of the growing shoots. The start of the third generation is recognisable due to a sudden increase in the number of infected shoot tips.

At the end of June, an increasing number of winged viviparea is formed. These winged aphids disperse to Plantago between the end of June and the end of July. This is due to inducing factors for migration such as crowding, increasing temperature, hormonal effects, host plant quality (including ceasing shoot growth), and increasing day length.

The third graph (autumn) simulates the population of the winged adult aphids that return on the apple trees (gynoparae).

After diapause induction by decreasing daylength, adult RAA begin to produce winged females (gynoparae) that develop into adults that migrate back to apple trees between mid-September and mid-October.

Two to three weeks later, after the return of the females, the viviparea on the Plantago start to produce winged males that also migrate to the apple trees.

The second graph (autumn) simulate the population of the oviparous.

Eggs can be targeted with Pre-bud break applications with oil to suffocate overwintering eggs, but this is only partially effective.

Treatments with natural pyrethrum between the green tip and mouse-ear stage also have an effect on RAA, which proves that the winter eggs of RAA hatch relatively shortly after bud break.

Spring applications are most effective when made when first fundatrices are mature, just before the moment they start giving birth to the next generation aphids. Later applications with insecticides tend to become less effective as the generations develop, and most fruit damage is caused early season. Therefore, follow-up applications should be made as soon as it is clear that a single treatment is not sufficiently effective.

Autumn applications with insecticides should be made around the end of September and the beginning of October, just before the oviparous aphids start laying the winter eggs. Trials with this strategy have been made in The Netherlands, UK, France, and Switzerland (Blommers, Cross, Romet, Daniel). If the timing of the treatment is correct, next year’s spring population can be reduced by over 90%. For several IPM and organic growers, this is a standard treatment.