Since 2012, Marssonina has been the source of significant leaf fall in organic orchards and can cause significant damage when not managed with a suitable fungicide program. In conventional orchards, disease development appears to be suppressed by the regular application of summer fungicides.

Marssonina disease has been observed in apple orchards in the Alpine region since 2010. The disease was first discovered in northern Italy, Switzerland, southern Germany, and Austria. But in 2014, the first case was confirmed in France (Normandy). Initially, the disease was mainly detected in untreated or low-input orchards. 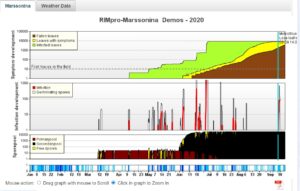 The lower graph models the primary stock of spores (in brown). The model begins with an arbitrary inoculum of spores produced in the overwintering leaves, without distinguishing whether they are in, under, or above the trees. This primary stock decreases in spring with the decomposition of the disease contained in the leaf litter.

Acervuli of infected leaves need a period of surface moisture to prepare for spore release. Once free in the aqueous film (modelled in yellow), the conidia can be distributed by splashing to other parts of the tree. Longer and more abundant rain periods distribute more spores and potentially allow more serious infection events. Black corresponds to the secondary stock resulting from the sporulation of the spots already developed.

The middle graph models illustrate spore germination in white and plant infection in red. The spores that are splashed onto the new leaves need a film of water to germinate and infect the leaf surface. The spores can germinate and develop as long as the leaf is wet and only survive a short time during times of drought.

The top graph models the onset of symptoms. The time between expression of the first symptom on a leaf that is still green and complete yellowing and necrotic leaf drop is estimated in days from field observations, as no additional information is available. The number of infected leaves increases during the summer, and untreated apple trees can be completely defoliated by August. During periods without rain, the disease level remains stable.

IMPORTANT: the biofix must be correctly informed because the model starts on the date of the green tips defined by the user. Note that the model simulates the development of the disease in an untreated orchard.