Black rot is an important disease in hot and humid growing regions, but it is also present in north-western Europe. All growing green tissue is susceptible, however, infection on the fruit is the most serious as it can cause substantial economic loss. The inoculum easily persists from year to year, making disease management increasingly difficult.

In Europe, severe epidemics were once limited to poorly managed vineyards and downy mildew tolerant varieties that were less intensively sprayed. In recent years, there has also been an increase in black rot in traditional European grape vineyards. It is not known whether this is due to climate change or to changes in farming methods. Grape black rot tends to increase in organic vineyards where the applied copper rates are low.

This fungus overwinters in mummified fruits, in shoot lesions, and on the ground. Spring rains trigger the release of spores. Young leaves can be infected throughout the growing season. The lesions that appear on the leaves produce secondary spores that form the inoculum for secondary disease cycles. 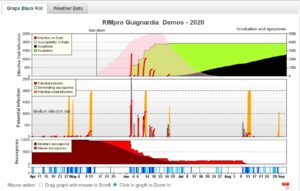 In the bar below the graph, dark blue represents the periods when your weather station recorded rain. Light blue is the period when the leaves are wet, based on your records of rain, relative humidity, and humidity.

The lower graph simulates the stock of ascospores on the soil surface as well as the evolution of their maturation.

The middle graph simulates potential ascospore infections (in red) for vineyards with a low level of disease (= normal situation).

The upper graph is relevant for low inoculum vineyards and includes fruit sensitivity in interpreting the severity of ascospore infections. Actual infections are, therefore, a combination of potential infections (linked to the biology of the fungus and climatology) and the sensitivity of the plant.

The pink graph represents the relative sensitivity of fruits during and after flowering. Green indicates the incubation period, and black the slow and gradual appearance of infections that occur when the fruits are young. Infection of young fruits has a shorter incubation time than infection of older fruits.

In vineyards with a high level of ascosporic and conidium inoculum throughout the growing season, pre-flowering infections on the leaves may already provide secondary inoculum during flowering and increase the level of fruit infection.

In these vineyards, sanitation is the main management tool. All infected bunches and shoots should be cut and removed from the vineyard. Only after that, you can expect some efficacy of the spraying program. In trials in vineyards with high inoculum, even tight schedules with frequent fungicide applications were often insufficient.

In heavily infected vineyards, mummified clusters produce ten times more ascospores than perithecia on the ground and their spore production continues until late summer. RIMpro does not take this type of ascospores into account, refer to infections in orange when you are in this situation.