The Codling moth (Cydia pomonella) is the most important apple pest in the world. The larvae directly damage the fruit, and the population can increase very quickly over a few generations.

Common tools for decisions on Codling Moth control as pheromone traps, and temperature sums to predict key events, have proven unreliable in the field. First eggs are deposited days or weeks after the first male moths are caught in the traps, and peeks in male trap catches do not coincidence with peaks in egg deposition by females. Temperatures sums roughly indicate the first moths, the first egg-hatch, the first moths of the second generation and so on. To make our decisions, we are, however, not interested in these ‘first events’. We need to know when the bulk of the larva is hatching and when the next batch of the larva is expected, to plan our treatments. 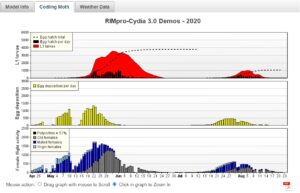 The model follows the development of a codling moth population in the orchard from the end of winter and throughout the production season. The climate and geographic location determine whether the moth multiplies in one or more generations. The end of the diapause depends on the temperature and the day length.

The lower graph shows the active flight of the female moth. The flight of a female moth depends on crepuscular air temperatures. Methods that lead to the sexual confusion of the moths must be installed in the orchard before the start of the flight.

The middle graph shows the daily laying of eggs (yellow). The flight of females during warm evenings leads to heavy egg-laying. During colder or rainy evenings, fewer eggs are laid. The graph below shows a decrease in egg-laying around May 15th due to unfavourable weather conditions. Insecticides with ovicidal activity should be applied just before the heavy egg-laying forecast.

The upper graph shows the number of hatched eggs in black (and dotted line for the cumulative number) as well as the number of young larvae from freshly hatched eggs. Larval development is depending on temperatures. These larvae are sensitive to insecticides with larval activity, including the granulosis virus.

Full-grown Codling Moth larvae that leave the fruits can pupate and contribute to the next generation in the same year, or they can go in diapause to survive winter and pupate next spring. The potential magnitude of the second Codling Moth generation is, therefore, determined by the number of larvae that complete their larval development before the middle of July (February in the southern hemisphere). The actual magnitude of the second generation in individual orchards is, however, strongly dependent on the success of the management of the first generation.

Special care should be taken for the accuracy of the temperature measurements, as most processes in the model are temperature driven. While the processes are simulated over a longer period of time, errors in measurements accumulate.