The Apple Sawfly (Hoplocampa testudinea) is a significant pest in organic and low-input production systems. The population can grow over successive years of production, and without proper management, 50-80% of the crop can be lost.

For control with “alternative pesticides”, it is essential to predict when the eggs will hatch. The optimal timing of insecticide applications differs between orchards and varieties of apples or pears.

The model suggests the best time to set the traps in the orchard and calculates the start of the flight. The operator also has the option of entering the flight start date. The user must enter the date of the beginning of bloom for his apple variety. From there, the model calculates the recommended application date. 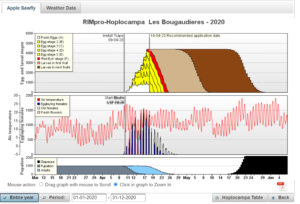 The lower graph shows the evolution of stages in the soil after diapause. During diapause in the soil, the larvae do not react to temperatures. In mid-March (mid-September in the southern hemisphere), diapause ends and, therefore, the development of the adult stages is proportional to the temperature of the soil.

The middle graph shows the flight of females. The apple sawfly only flies during the day. Flight activity is proportional to air temperature from a minimum threshold. There are no simulated flights during rainy periods.

The upper graph simulates the development of eggs. Indeed, embryonic development is divided into six distinct stages, and the last stage is called the “Red eye” stage. During their development, the larvae migrate from one fruit to another. Despite the little information available on this process, the model simulates this migration from the first to the second fruit as a function of Degree Days. The Apple Sawfly lays eggs on the new open flowers. Within a variety, the laying of eggs starts on the first flowers on old wood, and then it continues on the flowers opening on the one-year-old wood. The model considers and simulates the number of freshly opened flowers.

IMPORTANT: The flowering simulation starts on the opening date of the first central flower (BBCH 60). This biofix is ​​variety specific and must be entered by the user. At farm level, the laying of the eggs starts on the early varieties and continues on the later ones.

Want to protect your crops against pests and diseases? Make use of all RIMpro’s scientific and practical experience and farm more sustainably. We offer packages both for individual growers as well as consultants. Take a look at our pricing.